Ludwig Feuerbach was born in 1804 in Bavaria.  His father was a professor and a political and legal reformer and many of his seven siblings went on to have very successful careers in diverse fields including law, archaeology and maths.  Ludwig himself later became known for his criticisms of religion (especially Christianity) but as a boy he was very religious.  His interest in religion led him to study Theology at Heidelberg during the early 1820s.

Georg Hegel developed the dialectical view of history.  This is the view that history does not remain static but undergoes constant revisions which means that every idea, every ideology, every paradigm and every institution has a beginning and will also have an end. The way this happens in practice is by a new idea (a counter thesis) arising to challenge the current idea (the thesis).  This results in a period of struggle between the opposing ideas before a resolution is reached (the synthesis).

Feuerbach became very interested in the works of Hegel and went to Berlin in 1824 to study under him.  Over time he began to move away from traditional theology and align himself with the philosophy department.  After finishing his dissertation in 1828 Feuerbach became a lecturer in philosophy and history at the (theologically conservative) Erlangen University and during the 1830s wrote several books on the history of philosophy.  In 1839 he published ‘Thoughts on Death and Immortality’.  The book was controversial partly for the thesis but also for the anti-religious satire that he included.  Although he took the precaution of publishing the book anonymously he was found out and dismissed from his position at the traditional and conservative Erlangen University.  Feuerbach then became an independent scholar (he had married a wealthy woman named Bertha Low) and continued writing.  In 1841 he published what is probably his most famous work; ‘The Essence of Christianity’.

Feuerbach lost his lectureship due to‘Thoughts on Death and Immortality’ published in 1830.  In this (complicated and - according to many commentators - confused) work he argues that reason (pure thought) is the essence of what it means to be human.  He criticised popular religion for placing too much emphasis on the egotistical idea of personal immortality.  He argued that the idea of a personal life after death was a relatively recent idea within religion and certainly not one found within Greek or Roman Religion.  He also believed that the idea of a personal God was equally egotistical.  However, despite attacking Christianity he did not (yet) reject religion as a whole.  In fact, he argued that popular Christianity failed to be a ‘true religion’ because it was concerned with the self rather than with God.  He defined true religion as being 'a matter of God, of the will of God, of God in and for himself'.

Feuerbach’s ideas changed and developed throughout the course of his life so that it is impossible to fully reconcile his early work with his later philosophy.

Feuerbach argued that religion is a projection of our hopes and desires.  It is what we create to deal with our fears about life and about death.  We fear death, we create eternal life and personal immortality.  We fear helplessness in the face of disaster, we create a benevolent omnipotent God and saviour.

Feuerbach describes the ‘longing’ of the heart for a personal God.

'Longing says: There must be a personal God, i.e. it cannot be that there is not; satisfied feeling says he is.'

So people believe in God because they want God to exist.  They then create ‘God’ as a projection of all the best bits of their own human nature (reason, empathy, morality, creativity).  God is thus a man-made illusion which derives from our ability to:

Karl Marx argued that this ‘reversal’ is the root of alienation: humanity worships its own essence without realising it is doing so.  People see God as epitomising good and thus see themselves as sinful by contrast.  God is powerful, they are weak etc.. Furthermore, Marx believed that religion was harmful because people turn to this illusory God in the hope that he will save them and this stopped them from trying to solve their own problems.  Marx famously compared religion to opium.  Opiates are powerful pain killers but whilst they alleviate the symptoms they do not cure the disease.  Likewise, religion might dull the pain of an existence full of suffering and it might pacify the patient but it does nothing to get to the root cause of the problem.

We are not created in God’s image (as in the traditional Genesis story), but rather God is created in ours.  Human beings give God the quality of love because they already value love.  The predicate ‘love’ is already given divine status in that we worship it.  The same applies to knowledge.  We give God the quality of omniscience because we value knowledge in others ourselves and in others.  Obviously this process is subconscious and the religious believer does not realise that actually the object of his worship is human nature.

Feuerbach followed up The Essence of Christianity in 1848 with Lectures on the Essence of Religion.  In these lectures he continued to argue that God and religion are a man-made projection.  However, he abandoned the idea that humans are subconsciously projecting their own nature.  Instead, he saw religion as an attempt to control the powerful and often frightening forces of nature.  These powers are personified and placated by associating them with God and by worshipping them.

As evidence for his theory Feuerbach drew on the fact that beliefs about God change over time and reflect the needs and values of that particular society (thus obviously supporting the idea that the idea of God is created as a response to needs and values).  He observed:

‘The highest virtue to ancient Germans was the virtue of the warrior; that is why their highest god was the god of war – Odin.’

Feuerbach was not the first to have noticed this.  The fifth century Greek philosopher Xenophanes commented that a nation’s gods reflect their own characteristics.

‘Ethiopians say that their gods are snub-nosed and black; Thracians that theirs are blue-eyed and red-haired.’

Xenophanes went on to suggest that animals, if they had gods and the ability to paint would certainly depict their gods as one of their own too.  However, Xenophanes’ point was that people misrepresent the divine by depicting it in their own image.  He did not conclude that God is only a product of the imagination.  By contrast, Feuerbach believed that each culture comes to realise that the religions of the previous age were no more than illusions and superstitions and that eventually

‘[I]t will be universally recognized that the objects of Christian religion, like the pagan gods, were mere imagination.’

However, there are various possible religious responses to this:

‘Feuerbach’s aphorism that humans created God in their own image can easily be inverted: God made humans in his image and therefore they—by virtue of their theomorphic nature—project out a God who is personal, like them’

We can also challenge Feuerbach’s theory in the following ways: 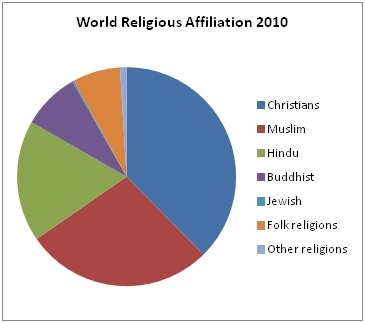 Feuerbach’s criticisms of religion have been very influential and many people continue to find it a persuasive account of the basis for religious belief.

The ideas of the Enlightenment and the progress of science did not necessarily lead to the destruction of religious belief.  Some people argued that scientific study actually reinforced belief in an 'author of the laws of nature'.  However, such a God tended to be views as an remote being far removed from traditional Christian beliefs about a loving God actively interceding in human affairs.

Find out more about deism here.

Feuerbach’s approach to the question of religion can be seen as the natural culmination of modernism.  He emphasised the primacy of reason and drew on empirical evidence to support his conclusions and was confident and optimistic that such a method would lead him to the truth.  He was far removed from the medieval approach to religion in which divine revelation was seen as the authoritative basis for knowledge.  Instead, Feuerbach challenged divine revelation and submitted it to the scrutiny of human reason.  Furthermore, Feuerbach’s interest in man as the measure of all things again reflected the post-Enlightenment emphasis on autonomy and individualism.  Feuerbach developed his own metanarrative in which humanity progresses through stages rejecting the gods of the previous age as idol before eventually arriving at the understanding that all religion is illusory.

Thus Feuerbach’s ideas illustrate the way in which the modernist approach could be seen as destructive to religion.  However, it need not be so and for some the modernist method lead to an understanding of a God who was the author of the laws of nature and discoverable through the pursuits of science.  This approach also entailed a certain amount of reworking traditional beliefs and values.  Gone was the interventionist God performing miracles in response to prayer.  In his place was a sort of divine architect and mathematician who could be admired for the wonderful way in which he had created an ordered and purposeful creation.

For more detail about Feuerbach refer to http://plato.stanford.edu/entries/ludwig-feuerbach/

For a simpler summary try http://www.enotes.com/ludwig-feuerbach-essays/feuerbach-ludwig

Go back to summary page for 'What is Religion?'

AQA Philosophy AS (new A level)

AQA Philosophy A2 (new A level)